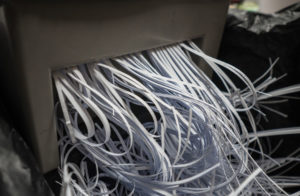 So, you are about to take the leap to Electronic Document Management, all the years of paper records have slowly crept into a mountain of hard copies. What is it that you do with all of your sensitive data? We can help you here, thanks to our Secure Document Destruction service. Perhaps it won’t surprise you to hear that there have been some interesting moments in history relating to document destruction from its inception to moments of infamy and notoriety. There is more to these document destruction devices than meets the eye,. Document destruction is an important part of every company’s document management solutions. And since sensitive information falling into the wrong hands can have far-reaching consequences, proper document destruction policies are critically important as you will see from these interesting and sometimes controversial facts. Did you know… …that it was Abbot Augusts Low, inventor from Brooklyn, New York, who patented the prototype of the first document destruction device in the year 1909? He named his invention the ‘waste-paper receptacle’ and had big plans for his machine.. Unfortunately, the poor old man passed away three years later, before he even had the chance to manufacture the first functional document shredder. Did you know… …that the second paper shredder was based on a hand-cranked pasta maker? It was developed by Adolph Ehinger in Germany in 1935 to destroy thousands of documents with anti-Nazi propaganda before Hitler came into power. Later, Ehinger converted his hand-crank version into a machine powered by an electric motor.. Ehinger’s documents shredders are still manufactured today by EBA Krug & Priester GmbH & Co. in Balingen. Did you know… …that in August 1974, President Richard Nixon, after being forced to resign because of the Watergate Scandal, shredded vast quantities of incriminating documents in order to cover up the scandal? On his last day in office at the White house, there were several ‘burn sessions’ happening in fireplaces in different rooms to destroy ‘potentially troublesome documents’, while his office was overflowing with plastic bag upon plastic bag full of shredded documents. Did you know… …that in 1979 Iranian revolutionaries seized the American embassy in Teheran and got hold of vast numbers of classified U.S. government documents? Many of these documents containing intelligence information had been shredded but were ‘easily’ pieced back together to reveal the information which they then proceeded to publish. From that moment, cross-cut shredders became the norm across government operations and most businesses worldwide. Words of caution Remember that rubbish is public property. Once your rubbish ‘gets out’, anyone, whether with good or bad intentions, has the right to sift through it and there’s nothing you can do about it. That should make you paranoid enough about protecting your sensitive information. Our advice: every document, whether personal or business related, that has sensitive information should be shredded before it is tossed. Add this important task to your document management procedures. Bio The Document Warehouse is known for providing effective document management systems.  Since its inception in 1992, operating as an offsite document storage and record management company in Johannesburg, the company has expanded to most cities in South Africa and around the world. The Document Warehouse employs hundreds of people and is constantly finding innovative document storage and management solutions to improve the cost-effective service that they provide clients.

This website uses cookies to improve your experience while you navigate through the website. Out of these, the cookies that are categorized as necessary are stored on your browser as they are essential for the working of basic functionalities of the website. We also use third-party cookies that help us analyze and understand how you use this website. These cookies will be stored in your browser only with your consent. You also have the option to opt-out of these cookies. But opting out of some of these cookies may affect your browsing experience.
Necessary Always Enabled
Necessary cookies are absolutely essential for the website to function properly. These cookies ensure basic functionalities and security features of the website, anonymously.
Functional
Functional cookies help to perform certain functionalities like sharing the content of the website on social media platforms, collect feedbacks, and other third-party features.
Performance
Performance cookies are used to understand and analyze the key performance indexes of the website which helps in delivering a better user experience for the visitors.
Analytics
Analytical cookies are used to understand how visitors interact with the website. These cookies help provide information on metrics the number of visitors, bounce rate, traffic source, etc.
Advertisement
Advertisement cookies are used to provide visitors with relevant ads and marketing campaigns. These cookies track visitors across websites and collect information to provide customized ads.
Others
Other uncategorized cookies are those that are being analyzed and have not been classified into a category as yet.
SAVE & ACCEPT